What a game we had on Tuesday evening between the DRC and G15 Youth Project. An incredible effort from everyone involved. The attitude from each player was spot on. There was commitment, a desire to challenge, great skill and a mutual respect between the players. Our previous match against one another was a very close match. It finished 4-3 to our lads but G15 were never out the game. Similar to the previous game, we once again steamed ahead, this time it was 6-1 in the blink of an eye. But fair play to the G15 team, they never give up. They clawed their way back into the game and managed to find an equaliser with the last kick of the game! incredible scenes. G15 then won the resulting penalties 3-1. Our team was gutted but we know we will be there or thereabouts in the next game. All set up for a decider!! Game on! 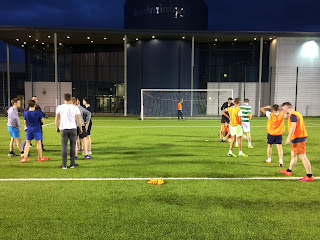 DRC Youth Project
Glasgow
The 'Dumbarton Road Corridor Youth Project' (DRC) works with socially excluded young people in the communities of Yoker, Scotstoun and Whiteinch. Since October 2016 we have expanded our highly successful employability initiative across the whole of the NW of Glasgow with our partner, Workingrite.